The Historical Process – Cycles of War

In the early 1900s, Alexander Chizhevsky (sometimes spelled Tchijevsky or various other ways) made very comprehensive investigations in historical processes, especially wars, to try and determine the causes of the processes. He found that existing methods of analysis could not predict major events that were about to happen.

Unfortunately for us in the English speaking world, most of Chizhevsky’s writing is in Russian or French and has never been translated into English. Some parts have been, and the investigation into war has been reported in English. Some of this material has also been reported by Raymond Wheeler in America, but I think that Chizhevsky was the originator. It would be good to know the full story on any links between these two.

Chizhevsky first began to observe that conflicts in Russia tended to be cyclic. After publishing several papers on this he expanded his study to world wide conflicts and made an index of battles for the last 2500 years. It showed clearly that there were 9 fairly regular peaks in conflicts each century, or averaging 11.1 years apart. There were other fluctuations, great sweeping rises and falls over longer periods, but this one cycle stood out.

It so happens that the sunspot cycle also has an average period of 11.1 years, so it was natural to begin to look at the connection. He found that the peak in human aggression fairly much coincided with the peak in sunspots. It is natural to wonder as to whether the Sun is somehow causing or contributing to human behaviour.

There are some additional facts available to us now that help to understand this process. I have never seen this fully laid out exactly like this before (excluding things that I have written), but here are a collection of facts that we can connect the dots on:

1. The quantity of different types of radiation vary over the sunspot cycle.

2. There is a continuous stream of radiation of various types, called the “Solar Wind” that arrives at the Earth.

3. Fluctuations in the stream of radiation at the Earth affects the earth’s geomagnetic field.

4. There is an oscillation of the Earth’s entire electromagnetic field, called the “Schumann Resonance” which oscillates about 7.5 times per second because that is how fast electromagnetic waves travel around the Earth.

5. Bursts of Solar radiation can get the Schumann resonance really ringing. Although the 7.5 Hz mode is the main one, there are also oscillations at near multiples of this: 15, 22.5, 30 Hz and sometimes at lower frequencies such as 3 Hz.

6. Human brain wave frequencies that are commonly studied cover the range from about 0.3 to 40 Hz, and the Schumann resonance is right in the middle of that range. The brain is a largely electrical organ in its functioning.

7. Outside electromagnetic fields can affect the brain by entrainment or in other ways. For example it is known that 10 Hz waves will make human reaction times faster while 3 Hz waves will slow it down.

8. Accidents are more frequent when there are strong ELF or ULF (Extra Low Frequency or Ultra Low Frequency) waves such as 3 Hz. This can be understood as resulting from a slowing down of human reaction times – people are less able to deal with tripping up or sudden events and so more likely to have an accident.

I do not know of evidence that moods are affected by ELF / ULF waves, but would expect that to be the case. Certainly we may say that the evidence is that when the Sun gets uppity, so do people, probably because of electromagnetic waves affecting our brain operation.

My guess is that we all have stored up resentments that we are bottling up, and that when a bit of extra electrical activity is brought to bear on our brains, these then overflow just as they would when the last straw was added by events in our lives. Then all sorts of stuff bursts forth. However when this comes from the whole Earth resonating, it means that many people get agitated at the same time. That is just the recipe for international conflict or social unrest. 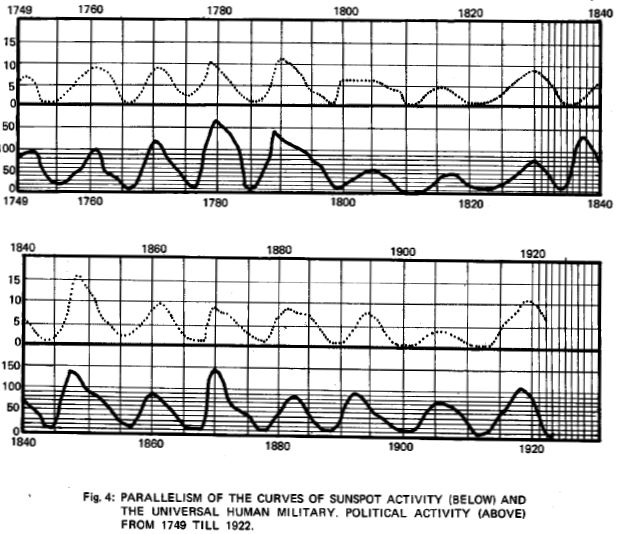 Chizhevsky’s paper (1.4 MB PDF file) as published by the Foundation for the Study of Cycles.

For 4 years from early 2007 until late 2010, Ray Tomes ran a blog called “Wobbly Universe” on his personal web site. With software changes that blog stopped working. Over the coming weeks or months these old articles will be reposted to CRI blog.

Ray's career was in computer software development including system software design, economic modeling, investments. He spent 15 years full time on cycles research and has spoken on cycles and related topics at conferences and seminars around the world. He retired at age 42 to study cycles full time and work out “The Formula for the Universe” and as a result developed the Harmonics Theory as an explanation for observed patterns of cycles and structure of the Universe. His current project is the development of CATS (Cycles Analysis & Time Series) software, and collecting and organizing large quantities of time series data and analyzing this data to test and confirm Dewey's findings in an organized way. Interested in all aspects of cycles especially climate change and causes.
View all posts by Ray Tomes →
This entry was posted in astronomy-Solar, Biology-General, cycles-Synchrony, History and tagged 11.1 years, 53.5 years, 6.0 years, Chizhevsky, ELF, raytomes, schumman resonance, sunspots, ULF, universe, war, wobbly, wobblyuniverse. Bookmark the permalink.